The final movie in the Hobbit franchise (at least until Peter Jackson decides to adapt the Simarillion into a three or more part epic) premiered last week to an opening weekend total of $90 million. It closed out the storylines of the previous Hobbit movies effectively, and it opened a few links to the Lord of the Rings movies that it precedes temporally. It had an all-star cast, great music, stunning visuals, and it will continue to rake in money over the next few weekends as people take time off during the holidays to finish out this epic series. It has many incredible parts to it, but do the pieces together form a cohesive whole? Let’s take a look at whether The Hobbit: The Battle of the Five Armies is worth seeing in theatres.

If you’re going to this movie expecting a lot of plot, you’ll be disappointed. This is the weakest part of the film. Since this is the third piece of a book that takes less time to read than it takes to sit and watch the movies, there is not a lot of story left to tell. Within 10 minutes of the film’s beginning, the largest cliffhanger from the previous movie is resolved, and whispers in the theatre begin commenting, “Well, that was a short movie.” The rest of the movie is spent concluding the quest of the dwarves and conducting the titular battle. Now, to say there is little plot is not to say that there is little action. The whole movie is action, as one would expect from a subtitle like Battle of the Five Armies. Even though we know how some of the action sequences will turn out thanks to the Lord of the Rings movies, that doesn’t detract from the excitement of the fight scenes.

What does detract from the movie is the insertion of two minor plots that steal from the action for no apparent reason. These plots come in the form of the wood-elf Tauriel and the human Alfrid Lickspittle. Tauriel is an elf woman who first appeared in Hobbit: Desolation of Smaug. She’s the equal of (or perhaps even greater than) the ever-popular Legolas in terms of bow skills, beauty and general elven bad-assery. Then she falls in love with a dwarf. While this romance subplot does not diminish her skills, it does somewhat weaken her character. Her choices seem somewhat haphazard in relation to the other characters; whereas they are fighting for their homes or for revenge or for riches (no one ever accused their motives of being noble), she seems to totter into scenes just to shoot things in the pursuit of her dwarf. Her final lines in the movie even fall back on being a romantic cliché. This lack of direction of her character is likely due to the fact that she was created by Peter Jackson for the purposes of these two movies. Tauriel does not appear in the source material, and so she has no plot relevance. A weak personal ending and a lack of direction unfortunately hampered an otherwise impressive character. 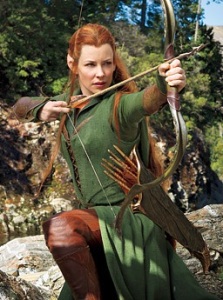 Alfrid Lickspittle, on the other hand, was exactly what you’d expect from someone with the name “Lickspittle.” Long, greasy hair, sunken eyes under a unibrow, a pedophile-type mustache… he’s the quintessential “worm” character. He does everything he can to look out for his own interests, and clings to the person with the most power in the foolish belief that it keeps him secure and well-off. He seems intended to provide comic relief to a movie heavy with death, but he fails at that task. By his third appearance, groans can be heard from most moviegoers. Alfrid does come off as exactly the character he is intended to be, but he was not a necessary part of the film. He could have easily been removed, and no part of the plot would have been altered even slightly. He was another addition by Peter Jackson, though he was based on an unnamed advisor to the Master of Laketown that appeared in a single scene in the original book. Perhaps the movie character would have been better had he received the same treatment.

Though it may seem like I’m stuck on the negatives of this film, it does have some powerful factors in its favor as well. Most notable, of course, are the graphic elements. The scenery is gorgeous, with wide, sweeping shots that give a sense of scale to the battle sequences. The special effects and the CGI are expertly done, and no one can ever get enough of exploding walls and glittering elven armies and terrifying orcish hordes and flaming cities and swooping war bats… I mean, unless you’re living through it… There is no part of this film that is not visually stunning. It is well worth the extra money to see it in 3D or in IMAX, particularly when it comes to the battles.

The action sequences in the movie are well worth the price of admission. While the movie is mainly focused on the action, it is paced well so that the audience can catch a breath between scenes. The best examples of this happen when aerial views are given of the clashing armies, or when the melee is too hectic to focus on a single character. It’s ironic that the smaller battles have the bigger impact, the more intense fighting. Though, it also makes sense; when the audience can focus on a character that they know and have connected with in some manner, it drives the fight home more. Still, there is plenty of fighting to keep any action fan happy and bouncing up and down in their seat as hearts are stabbed and heads are rolling. On a side note, orcs seem to be the most easily decapitated characters ever created.

Army of Orcs heading into battle

Two other major highlights of the film were the actors and the music. The Battle of the Five Armies has an all-star cast, led by Martin Freeman, Ian McKellen and Richard Armitage. Even small roles had big names filling the part, such as Stephen Fry as the Master of Laketown, Christopher Lee reprising his role as Saruman the White and Sylvester McCoy as Radagast the Brown. This acting talent was backed by a gorgeous score composed by Howard Shore, who has won three Academy Awards for his work on other movies in the Lord of the Rings Saga. His music fills the air perfectly for each situation, and the scenes without music are made more sharply distinct by its absence.

The company of Thorin Oakenshield

Overall, this is a movie worth seeing. Go in expecting action and beauty, but not a lot of substance. See it in 3D or in IMAX to get the most out of it. While The Hobbit probably would have been better served by not being split into three movies, it’s too late to change that now, and the movie should not be faulted for decisions that can’t be changed. The Battle of the Five Armies fits nicely in its place as an ending to the Hobbit trilogy and an introduction to the Lord of the Rings trilogy. And it is fun, pure and simple. So, go to your local theatre and experience The Hobbit: The Battle of the Five Armies. It’s the last Peter Jackson directed movie in Middle Earth… for now, at least.

The Hobbit: The Battle of the Five Armies is in theatres now. It is distributed by Warner Bros. Pictures and directed by Peter Jackson.