The Simpsons Serves Up a Stinker

While many people are talking about the recently aired Simpsons episode penned by Judd Apatow, let’s take a moment to look back at the midseason premier episode. In 26 seasons of any show, there are bound to be a few episodes that drop the ball, but “The Man Who Came To Be Dinner” was one of the worst in a long time. For a show that has always been an industry leader in terms of storytelling (there’s a whole South Park episode dedicated to things that The Simpsons did first), airing an episode like this one that substitutes disjointed jokes that are past their prime in place of a character driven plot is disappointing at best. Spoilers, such as they are, for the episode follow.

The Simpsons has followed a fairly regular pattern in recent years. The first few minutes are joke heavy, leading into a setup for the “meat” of the episode. The plot heavy middle has fewer jokes that are laugh-out-loud funny, but they are wittier and more likely to make viewers think for a second. The end generally goes for either heartwarming or a solid ending joke. “The Man Who Came To Be Dinner” tried hard to follow this pattern, but it forgot the funny start, it forgot to stick the ending, and there is less“meat” in the middle than there is in a Krusty Burger. 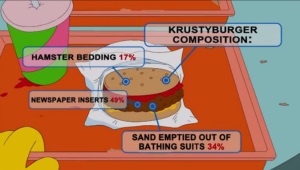 The reason that most of the jokes didn’t measure up is that they seemed both dated and recycled. It almost seemed like the episode wanted to be a clip show, given how many references there were to older episodes. The beginning segment featured a family vacation to “Diznee Land,” a parody park that first appeared in season two. The kids were doing an “Are we there yet?” routine that was funnier in the first few seasons than in the 26th. When they finally get to the park, what follows is a series of jokes that have been made about Disneyland since 1955. The lines are too long. The prices are too high. Bag checks are tedious. It’s too hot. Everything is merchandized and given a kitschy name. The most unique joke came in the mockery of the “It’s A Small World” ride, where the song threatens Bart’s life if he tried to leave the ride. That was the only joke that elicited a laugh in the entire episode. 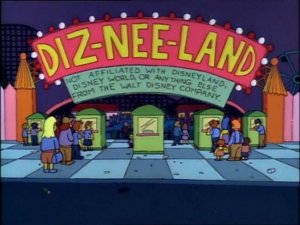 The middle of the episode begins when the Simpson family finds a new ride that no one else is on titled “Rocket to Your Doom.” The ride is a trap set by Kang and Kodos, who are making a rare appearance outside the Treehouse of Horror episodes (which Homer notes, saying, “But this isn’t Halloween!”) As the family hurtles towards Rigel Seven, two more famous jokes from past episodes get rehashed. Homer opens a bag of chips in zero-gravity, which leads him to try floating around to catch them, like he did during his time as an astronaut. However, Bart and Maggie continually beat him to the chips, a callback to the episode where Santa’s Little Helper has puppies that like to eat Homer’s chips before he can enjoy them. It actually gets obnoxious how many times Homer’s famous catchphrase of “d’oh” is used in this 30 second joke.

Once they arrive on Rigel Seven, and after a series of ill-conceived and ill-executed bodily function jokes (Rigelians give birth, then seconds later, those birthed give birth, and so on, but there seems to be an ending point after four continuous births? Their river is made from the drool of the dead, but the dead are dumped in halfway down the river?), the Simpsons are put on display in a zoo. A Rigelian with a doctorate in humanology comes to make sure they are comfortable, mistaking many aspects of human culture and biology. When Lilo and Stitch scoops you on a joke, don’t use that joke.

The humanologist tells them that one of them is going to be ceremonially eaten, and Homer is, unsurprisingly, chosen. Homer is on stage to be eaten when a teleport tube materializes around him (and gets stuck, in a gag that has been used on the show more times than can be counted). He is rescued by rebel Rigelians, peace-loving hippies who just want to learn about earth’s achievements and party. They offer him a way back home, but Homer won’t leave his family on the (literal) chopping block. He returns to the ceremony just in time to join his family in being eaten, but a section of his ass poisons the Rigelian queen when she eats it. The family is released (after Kang tells them that everyone should forget this happened), and spends the end segment mimicking the original Star Trek.

Having Kang remove this episode from canon may have been intended to excuse the disjointed nature, an attempt to say that this was just meant to be whimsical, not a serious episode. But most of the episodes aren’t serious, and almost never does anything carry from one episode to the next (except character deaths outside of the Treehouse of Horror episodes). Expanding the background of the Rigelians, particularly Kang and Kodos, could be a great story. In each of the 25 Treehouse of Horror episodes, the viewers have gotten to learn a little more about our favorite aliens. Spreading the stories out, focusing on them once each season, has worked. That’s more time and focus than most of the hundreds of Simpsons characters get in a season. This episode was not necessary, not engaging, and not funny; yet, it still pulled in the highest ratings of the night. The ability to win ratings should not leave writers complacent and willing to put a half-assed episode into circulation.

I am not holding this episode up as an example of declining quality in the show as a whole. One bad episode does not denote a pattern. However, this episode was just that: bad. Lazy writing and old and boring jokes combined to make an episode that should not have aired. “The Man Who Came To Be Dinner” leaves a bad taste in the mouths of viewers, who hope the rest of the season will wash away this bitter pill.

Like Loading...
Do not recommend, Now Airing, Review, Russ Disney, Fox, Review, Russ, The Simpsons, TV
← I wish… The Political Thriller of the Year →

2 responses to “The Simpsons Serves Up a Stinker”