Tag Archives: Phantom of the Opera

The Play That Killed Love: The Sequel to Phantom of the Opera

Phantom of the Opera is one of the best known musicals of all time. It has been running continuously around the world since it premiered in 1986, it won six Tony Awards for its original Broadway production, and it was made into a popular movie in 2004. It is the longest running Broadway show ever, having reached 10,000 performances in 2012. So, as happens with many successful franchises, a sequel was developed. Andrew Lloyd Webber, no longer guided by Gaston Leroux’s original work, went completely off the rails in the new story. The story is poorly written, the characters – who had at least some depth in the original show – were flattened to a single dimension each (if that), and the music – usually Webber’s saving grace – was simply bad. Let’s take a look at the sequel that defined horror through its existence and not its story, Love Never Dies.

Love Never Dies takes place 10 years after the end of Phantom of the Opera. Sort of. Webber seems to have forgotten that he set Phantom in 1881, since Love Never Dies takes place “10 years later” in 1907. In fact, the prologue of Phantom shows Raoul as elderly and confined to a wheelchair in 1905. Hurray for continuity. Temporal distortions aside, the story is set in the United States rather than in France, specifically at Coney Island. It turns out that the Phantom was behind the creation of Coney Island because he wanted a method to lure Christine – now a singer famous across Europe – back to him. The grand opening of Coney Island is, somehow, the excuse he needs to invite her to perform.

Christine accepts the invitation and arrives to America with her son Gustave and her husband Raoul in tow. In the 10 years or so between the plays, Raoul has gone from being a passionate and doting lover to a mean drunk who has accrued a large gambling debt that forces Christine to take singing jobs she does not want to take, such as the opening performance at Coney Island. The Phantom has been aided and supported by Meg and Madame Giry, who immigrated to America after the events of Phantom and saved up money to bring the Phantom into the country. In spite of 10 years, give or take, of providing for the Phantom, Meg still cannot get the musical genius to notice her singing and dancing skills. She was working to be the star of the opening night show, but the arrival of Christine bumps her from the spotlight. 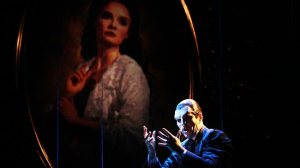 Not that he’s obsessed with her or anything.

It is worth noting at this point that Christine and Raoul do not know that the invitation to perform came from the Phantom; they do not know who the owner of the theme park is, just that he offered to pay enough to wipe away Raoul’s gambling debts. Raoul learns of the Phantom’s involvement when he encounters Madame Giry in a bar at the same time as the Phantom reveals himself to Christine in her room. The Phantom recounts with Christine the affair they had 10-ish years ago on the night before her wedding to Raoul, and she reveals that, had the Phantom stayed after that one night, she would have left Raoul at the altar for him. 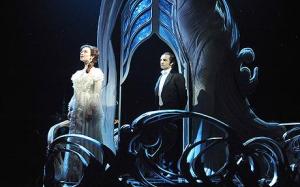 At least she’s still obsessed with him too.

At this point, Gustave interrupts the reminiscing, and the Phantom promises to show him all around Coney Island. The boy eventually ends up in the Phantom’s secret lair, where he avails himself of the assembled musical equipment and shows how skilled he is with music. Far too skilled to only have one musically gifted parent. Shock and surprise, spoiler alert, Gustave is not Raoul’s son, but the Phantom’s. After that highly anticlimactic reveal that was telegraphed from the start of the show, the Phantom launches into a song better suited for Rock of Ages than a show about early 20th century opera singers. After rocking out with daddy dearest, Gustave freaks out upon seeing the Phantom’s real face, just like Christine did in the original. Christine confirms that the Phantom is Gustave’s father, and promises never to tell that to her son. 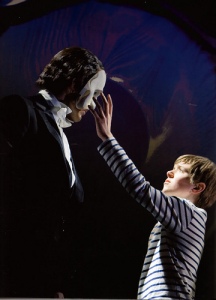 This goes exactly as well as expected.

Raoul, meanwhile, is still off drinking and gambling and generally making terrible life choices. Including his choice to make a bet with the Phantom that Christine will not sing at the opening. If she chooses not to and to leave with Raoul, then the Phantom will pay off all of Raoul’s gambling debts. If she does sing, then Raoul must leave, alone, and may never see his wife and her son again. Betting on one’s wife in a play goes about as well as it has since Taming of the Shrew, and Raoul slinks off, defeated, as Christine begins to sing the titular song. 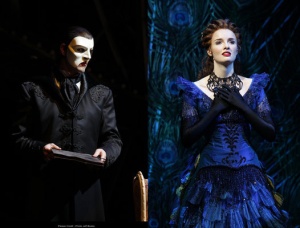 Then, because there wasn’t enough (read: any) action to speak of in the play, the final scene crams a play’s worth of plot into 10 minutes. It turns out that Meg got the money to support the Phantom through prostitution, an unnecessary twist that had zero warning. The fact that the Phantom still chooses Christine over her causes her to descend rapidly into madness, and she kidnaps and threatens to kill Gustave. The Phantom tries to give her an inspiring speech about how she can be so much more than what she is, and he decides that telling her she just isn’t as good as Christine is the right negotiation tactic. This works about as well as one might expect, and Meg releases Gustave so that she can shoot Christine instead. Christine dies after breaking her promise and telling Gustave that the mean, drunk man who raised him for his whole life was not his father, but the creepy, mangled man who kidnapped mommy once and killed a few dozen people actually is his father. The end. 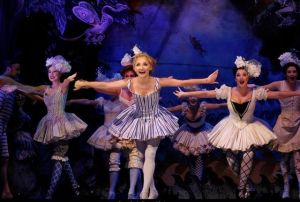 The face of a crazed hooker. In a chorus line.

This being a musical, there happen to be a number of songs to tell this insipid story. Or rather, that is normally the point of the songs in a musical, to tell and advance the story. In this show, however, the songs have the effect of breaking up the story more than carrying it. Part of this is due to the fact that the songs do not have a unifying structure to them. In Phantom, the song styles were more uniform. They were grand, nearly operatic songs that felt like they belonged in the scenes and the time period. The songs in Love Never Dies are disjointed, scattered haphazardly, and do not fit the tone, tenor or time of the show. This can pull the audience out of the reality that the show is trying to build, not that the audience would really want to stay in that reality anyway.

The Phantom likes to surround himself with freaks.

There are only two good songs, and they’re not actually good for the intended reason of “beautiful music and memorable lyrics.” The first is the song “Dear Old Friend,” sung when Raoul encounters Madame Giry and Christine encounters Meg Giry. This song is good because it’s funny to hear the passive-aggressive undertones to the words being said. They are all realizing that their lives are ruined by the presence of these other people who used to be their friends, and they greet each other kindly outwardly, while still letting each other know that their being in that place only means the worst for everyone. The second good song is “The Beauty Underneath,” the rock song that caps the first act. This song is good by how terribly placed it is. This song absolutely does not belong in this musical, and the whole show would be better for it being absent. All the same, it is the only memorable song, and it certainly livens up an otherwise dreary show.

The only thing that could possibly save this show is a good set of characters. Sadly, they’re just as big of a letdown as the rest. Raoul becomes an unlikable drunk, Christine turns out to have only been in love with the Phantom the whole time, Meg and Madame Giry get treated by the Phantom the same way that Webber treats them, as throwaway characters only serving to give the Phantom convenient access to the outside world. 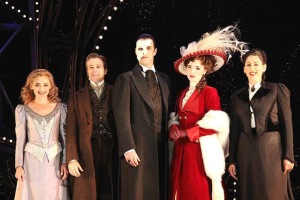 The whole show seems to be written like a fanfiction intended to show how cool the Phantom is, and to give him the happy ending he deserved over that jerk Raoul. And that’s actually what this show is, fanfiction. Webber takes the characters from the original novel and makes up his own story about them, completely separate from the source material. He rewrites the story the way he wants with the hero he wants. Never mind that the Phantom was the murderous and terrifying villain in the book, and Raoul was the noble hero. The Phantom still deserved to get the girl. And win. Because that is what Webber wants.

Love Never Dies was written by Andrew Lloyd Webber and Ben Elton as a sequel to Phantom of the Opera. A filmed version of the stage play can be found on DVD, if you really feel the need to suffer.